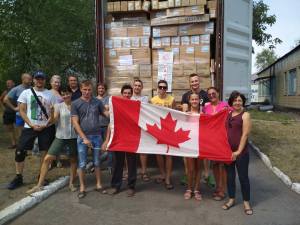 A container of medical supplies sent in June of this year to Ukraine by the UCC-MPC Euromaidan Committee has safely arrived in Mariupol, a city on the front lines in Eastern Ukraine. This shipment will assist wounded and displaced victims of Russian aggression. The bulk of the medical equipment was collected and donated by International Hope Canada. Costs for shipping the container to Ukraine were covered by a $5000 donation from the  Ukrainian Catholic Women’s League of Canada branch at St. Anne’s Ukrainian Catholic Church in Winnipeg, as well as from proceeds of the Ukrainian Women in Politics dinner sponsored by the Winnipeg branch of the Ukrainian Canadian Women’s Council. Additional items included in the shipment were supplied by volunteers in Toronto.  The complicated logistics for the transportation of the container including suggesting its ultimate destination where coordinated by the National UCC’s Ukraine Appeal.

The container arrived at the Mariupol Territorial Hospital of Woman’s and Children’s Health, where the contents were offloaded and  from there distributed to other medical facilities in the city.

Mariupol is on the front lines of the war in Eastern Ukraine. It is of important strategic value, and fighting – including frequent shelling and mortar attacks by Russian-backed forces – is causing injury and death to Ukrainian soldiers as well as to the civilian population on a daily basis.