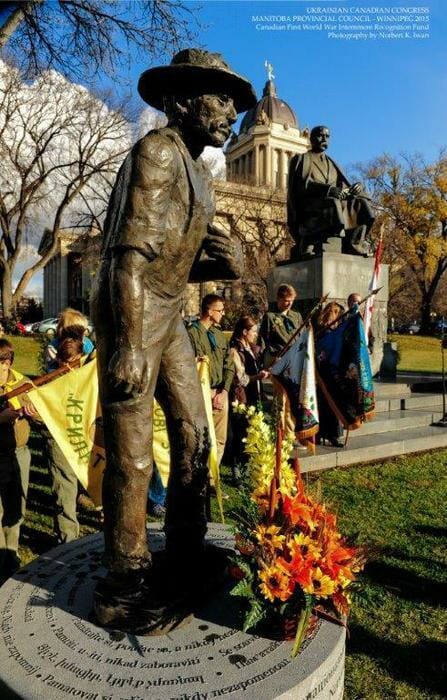 On October 24, 2015 the Ukrainian Canadian Congress – Manitoba Provincial Council organized a one day symposium to mark the unjust  Internment of Ukrainian Canadians and others during the First World War. This took place at the Provincial Legislature Building. Later that day, a monument honoring those interned was unveiled on the grounds of the Legislature.

Photos of the two events by Winnipeg Photographer Norbert K. Iwan can be viewed by clicking on the link view slideshow or here.

Please find information about applying to be the Internee Descendant Representative for 2014 to the Canadian First World War Internment Recognition Fund.

Dr. Semeon Hrushowetz, Joan Lewandowski, and Fr. Michael Kwiatkowski of Holy Eucharist Parish are shown with one of 100 plaques marking the 100th anniversary of the beginning of Ukrainian internment in Canada.

It’s a hidden black mark on Canadian history, but it will soon receive the recognition local Ukrainians say it deserves.

The 100th anniversary of the federal government’s invocation of the War Measures Act is approaching, and to commemorate the day, 100 plaques will be unveiled across Canada at 11 a.m. local time. The act, which allows for the declaration of war, allowed the government to place people of Eastern European descent, including Ukrainians, into camps across Canada — including in Winnipeg and Brandon. Camps were first opened in 1914, and the last were closed in early 1920, about a year and a half after the First World War officially ended. Over 8,500 people were detained as prisoners of war — called “enemy aliens” — in this period.

Fr. Michael Kwiatkowski of Holy Eucharist said the church found out earlier this spring it was in consideration to be a host, and found out shortly afterward one of the plaques was on its way.

“(We were selected) as one of the more major parishes in the city, with a lot of Ukrainian history,” Kwiatkowski explained, adding there are parishioners whose families were affected by the internment. “It’s an honour to be a part of this and do our part in bringing this to the fore.

“It’s a lesson for us that we wouldn’t repeat it.”

Kwiatkowski said the ceremony will be a simple one, beginning with a prayer for those affected, a speech from a witness whose family was affected, as well as dignitaries from the three levels of government.

Dr. Semeon Hrushowetz, one of the organizing parishioners, researched Canada’s history of internment camps, and said it wasn’t just the government that was unwilling to shed light on their existence.

“It was rather like a well-kept secret. It was like the famine (the Holodomor, the systematic starvation of Ukrainians by the Stalin regime in 1932 and 1933),” added fellow organizer Joan Lewandoski. “The people that did live it were afraid to mention it for fear of the repercussions.”

The plaque, which will be located on the church’s south wall, will be part of the church’s redevelopment of that area. Holy Eucharist plans to add a separate plaque with further information about the camps, as well as the creation of a courtyard area.