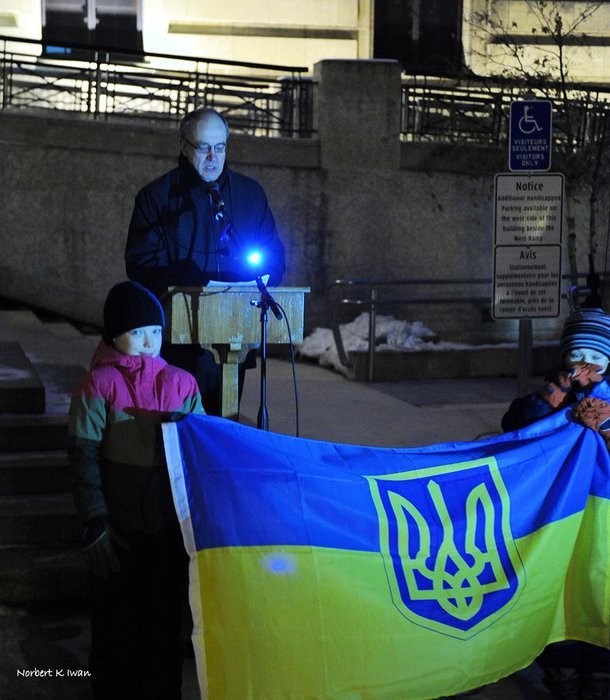 Speech delivered by Dr. Myroslaw Shkandrij (University of Manitoba) at the Rally to Mark the First Anniversary of the Euromaidan and to Show Solidarity with Ukraine.
Organized by the Ukrainian Canadian Congress – Manitoba Provincial Council Manitoba Legislative Building Winnipeg December 7, 2014

We met here just over a year ago (on December 2, 2013) in the first demonstration of solidarity with the Euromaidan. Since then we have witnessed the transformation of the protests into a tent city in Kyiv’s centre, the erection of barricades on Hrushevsky Street, the use of lethal force against demonstrators on February 18 to 20, President Yanukovych’s flight from Kyiv, the invasion of Crimea by Russian forces, the Putin-instigated takeover of parts of Donetsk and Luhansk oblasts, the presidential election of 25 May, and the parliamentary election of 26 October.

In this time the movement for civil rights changed from a protest against corrupt government into a revolution – one that demanded a new course for the country: respect for human rights, a legislature and judges that could not be bought, transparency in government actions, freedom of the press and assembly. These demands were initially addressed to the former President Yanukovych and his entourage, nicknamed the “family,” but his government responded, if you recall, with the infamous laws of January 16, which declared that any meeting in the city centre would be viewed as an act of rioting, banned the wearing of hard hats, and outlawed more than four cars driving together. The law was passed with no count, by a brief show of hands. Kidnappings and killings — of journalists and demonstrators — began almost immediately, on January 20-23, although the journalist Tetiana Chornovol had already been beaten and left for dead earlier, on December 25.

The rights and freedoms of Ukrainian citizens are now threatened by President Putin of Russia, Yanukovych’s puppet-master, who orchestrated the Russian intervention in the Crimea and Donbas. The Budapest Memorandum, which was signed exactly twenty years ago (on December 5, 1994) by the UK, USA and Russia, was supposed to guarantee Ukraine’s borders. It proved to be worthless. Instead, by his own admission Putin sent troops into the Crimea to annex the territory. Today he distributes medals to Russian soldiers who have died fighting in the Donbas in the attempt to extend Russia’s border. 8,000 Russian soldiers, according to some accounts, have died in the conflict so far. Putin’s goal is not only to extend the border of territories controlled by the Kremlin, but above all to destabilize Ukraine, because a democratic and prosperous neighbouring country is a mortal threat to the authoritarian regime he is trying to construct by inflaming nationalism and hatred of the West.

As many have said, the war is not just about Ukraine. It is a struggle for the principles and values to which all Europe and the international community of states subscribe. These values include respect for basic freedoms, and for agreements and norms, adherence to which is required in a civilized world. In fact, Putin himself demands such adherence of others when he signs political, economic, financial agreements, but he has broken agreements whenever it has suited his purpose, and his supporters have congratulated him for what they call “showing strength” or “outwitting” the West.

What has changed in a year? Putin’s policy in Ukraine has been a colossal failure. Above all because he has completely lost Ukraine. He wanted to create a “Russian world,” a “Novorossiia,” to spread a pro-Russian movement in the country, but the latest information is that even in the Donbas this has failed. The invaded territories are now a place of chaos, ruled by local overlords who steal supplies, run rackets, and fight among themselves. Anti-Kremlin feeling has grown rapidly because in conditions of general lawlessness there can be no security, no pensions, no jobs, no goods in stores – only the rule of the gun. Eastern Donetsk and Southern Luhansk are now an economic black hole, a region that requires constant, large-scale financial and military support, something that Russia cannot and is unwilling to provide. Just days ago Putin sacked the men who created and supervised his Ukraine policy – a clear indication of the policy’s failure.

What has changed in a year? Putin is today an international pariah. He is frequently compared to Hitler and Stalin for his hypocritical behaviour and his cynical belief in brute force as the only thing that counts. Western sanctions and the Kremlin’s policy of self-isolation have driven the ruble down and are beginning to have a negative effect on the Russian economy. Poverty and destabilization are now predicted for Russia itself. Separatist movements such as the one in Chechnya have been emboldened. Fearing the growth of social unrest, the Russian President has shut down most of the independent press and television broadcasting. He has made moves to control the internet, banned political demonstrations and imprisoned members of opposition parties. Instead of fostering a serious debate on the effects of his policies, he has unleashed a massive propaganda campaign.

The failure of Putin’s Ukraine policy has therefore led to domestic and international repercussions, but it has been most dramatic in Ukraine itself. Here everything has changed. Practically the entire population has united against Putin’s policy. Yellow and blue flags now fly across the country; monuments to the totalitarian past continue to fall, almost on a weekly basis; the population has voted overwhelmingly at every opportunity for a democratic order and a pro-European orientation, rejecting the prospect of a Eurasian dictatorship. Yes, we can express dismay at the election of some figures or the passing of some government decisions, but that is the point: elected figures can be unelected; the government’s decisions can be challenged and changed through public pressure. In Ukraine a drive for political and economic reforms has been initiated, for changes that will transform the country, making it more like Western Europe, less corrupt, less authoritarian, less Putinesque. For Ukrainians the vision of partnership with European democracies has never seemed more attractive. This, as Putin realizes, marks his greatest failure.

The foreign aggression has mobilized Ukrainians, made them understand the value of democratic freedoms and the need to fight for these. The past year has transformed Ukraine. It has also transformed us. Although the loss of life and the ugliness of war saddens and concerns us, as it should all observers, we are back here again, one year later, to express our solidarity with the struggle of Ukrainians for dignity, for a democratic order and an independent state.