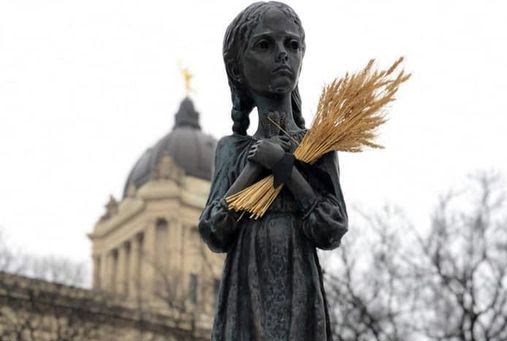 The Holodomor (Ukrainian: Голодомо́р derived from морити голодом, moryty holodom, ‘to kill by starvation’) also known as the Great Faminewas a famine in Soviet Ukraine organised by Joseph Stalin and his Communist regime from 1932 to 1933 that killed millions of Ukrainians. The term Holodomor emphasises the famine’s man-made and intentional aspects such as rejection of outside aid, confiscation of all household foodstuffs and restriction of population movement. As part of the wider Soviet famine of 1932–33 which affected the major grain-producing areas of the country, millions of inhabitants of Ukraine, the majority of whom were ethnic Ukrainians, died of starvation in a peacetime catastrophe unprecedented in the history of Ukraine.

The Ukrainian Canadian Congress – Manitoba Provincial COuncil (www.uccmanitoba.ca) calls upon all Canadians to commemorate this tragedy so that it may never happen again. Denying access to food is still used as a weapon against civilian populations in many conflict zones of the world, or as a way of subjugating different nationalities.

To learn more about the causes and consequences of the Holodomor, visit www.education.holodomor.ca.

Because of the Covid-19 restriction, all of the public commemorations of the Holodomor in Winnipeg can not take place. As alternatives, the UCC-MPC  urges Manitobans do some or all of the following:

Drive past or visit and/or lay a flower, wreath, or stalk of wheat at the Holodomor monuments The Mother and Child monument in front of Winnipeg City Hall and

The Bitter Memories of Childhood monument on the grounds of the Manitoba Legislative Building,

Drive past St. Mary the Protectress Ukrainian Orthodox Cathedral (820 Burrows Avenue, Winnipeg) and view the black flags installation in tribute to the victims of the Holodomor in Ukraine 1932—1933.

On November 28 at 2:00PM as part of the UCC-MPC Holodomor Commemorations we will be re-broadcasting Verba Dance Ensemble’s 2013 originally choreographed Holodomor commemoration presentation on the UCC-MPC YouTube Channel.

There are several on-line contemporary presentations by well-known historians and journalists that interested individuals can watch to learn more about the Holodomor.

A conversation with Anne Applebaum Stalin’s War on Ukraine. Writing “Red Famine”, the Story of the Holodomor https://www.facebook.com/canadian.institute.of.ukrainian.studies

Communism and the World: The Holodomor – A Conversation with Dr. Alexander Motyl

What Mendel Osherowitch Saw: Ukraine During the Holodomor