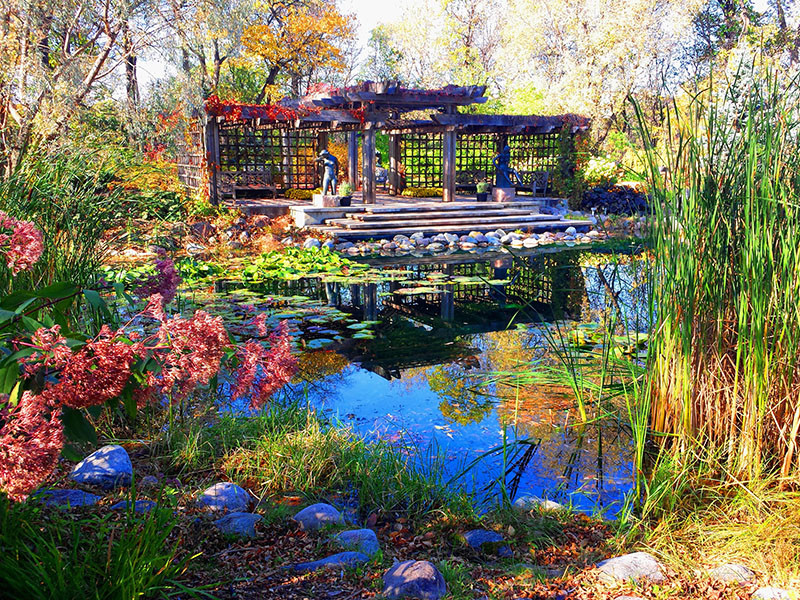 June 18, 2017 marked the 25th Anniversary of the official opening of the 1.2 hectare Leo Mol Sculpture Garden in Assiniboine Park in Winnipeg.  Below is an article by Luba Fedorkiw, which appeared in the June issue of Ukrainian Winnipeg  about the life of Leo Mol and the creation of this unique artistic landmark.

You can view the article as it appeared in the magazine by clicking here:

Born Leonid (Hryhorijevich) Molodozhanyn on January 15, 1915 in the village of  Polonne, Ukraine to a long line of family potters,*  and at his father’s side and within the community, Leonid apprenticed and acquired the craft of modeling clay, using the potter’s wheel  and firing clay, to create  ceramics.

Breaking from tradition, Leonid decided that he wanted to study painting in Vienna, Austria. At age 15, he became fluent in German and exposed  himself to the  rich history of world art, music and theater, while working  with sculptor Frans  Klimsh,  who specialized in  plasticine and terra cotta. The talented youth was accepted into Kunst Akademie [Berlin, Germany].* His formal art education was at the Leningrad Academy of Arts.  He married his wife Margareth in 1943.  By 1945 both resettled in Holland, where he changed his name to Leo Mol (nom de plume). Leo  attended the Academy of Art in The Hague.*

Leonid Molodozhanyn  and his wife immigrated to Canada in 1948, at a time when  Canada needed farmers not artists.  Mol persuaded the reluctant immigration  officer  in the Hague that he would be an asset to Canada, since his sponsors were grain farmers and he originated from a humble farming  village in Ukraine.

Arriving at Hudson Bay Junction near Prince Albert, Saskatchewan  during a harsh winter on the Canadian prairies was a stark awakening in itself.  Mol looked for immediate  work and found it in Winnipeg, where he befriended  Yakiw Maydanyk , also a painter, cartoonist and teacher. Initially, the newly naturalized artist assisted Maydanyk in painting  and decorating the interiors of  churches.

Local success for this soft spoken artist/sculptor  gained momentum through his talents as a figurine artist, focusing on Canadian themes in ceramic. Further, his 1950s modeling originals  in terra cotta and baked in a kiln, gained him the respected recognition of his fellow Manitoba artists. As he advanced his art, he received  major commissions from:1) the Canadian government 2) the  Provincial governments of Manitoba and  Alberta, 3) The University of Manitoba, 4) international universities, 5) Churches, 6) Communities and 7) private sponsors.

International success arrived  with Leo Mol’s  magnificent executions of classic portrait sculpture. “His understanding of and portraying the essence of each subject, led to major commissioned portraits”** placed in  capitals of the world.

Leo Mol generously donated his personal collection of 300 pieces of art which included paintings, sculptures, drawings and ceramics to the City of Winnipeg, on condition, a sculpture garden be built in Assiniboine Park to display his work.

June 18, 2017 marks the 25th Anniversary of the official opening of the 1.2 hectare Leo Mol Sculpture Garden.  It comprises a gallery, outdoor display of  sculptures,  School House Studio where visitors can view the creation of a bronze sculpture and a sitting area.

Very European in appeal, the natural ambience and calm retreat   provides the opportunity to pause and reflect on the talent of an humble artist and his craft.  The magnificent statue of a Hutzul playing his trembita (trumpet) welcomes visitors  to rediscover and appreciate the gift of one man who  loved  Winnipeg, Manitoba.

As we commemorate the 125th   Anniversary of Ukrainian immigration to Canada, let us proudly and respectfully re-acknowledge the prominence and significance of Leo Mol’s contribution to the tapestry of our Canadian Ukrainian culture and history. Let his  legacy of art remind us of his remarkable talent.

On June 18th  let us wear our Ukrainian best and with our families, find  time to visit  Leo Mol’s Sculpture Garden in Assiniboine Park and  honor his  memory – an internationally acclaimed sculptor.

“Leo Mol was one of Manitoba’s brightest stars. Through his work, he gave the Manitoba art world a gift that will enrich our province for generations.” Hon. Eric Robinson, Minister of Culture and Heritage ***