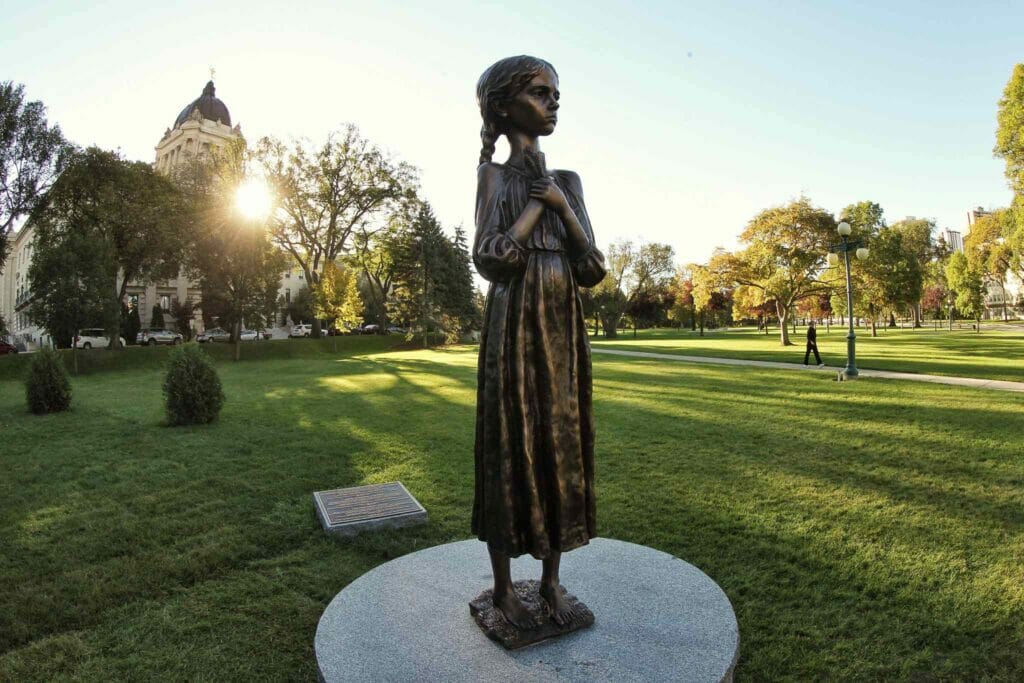 The Holodomor (Ukrainian: Голодомор, “Extermination by hunger”; “to kill by starvation”) was a famine in Ukraine in 1932-33 that killed some seven million people. The Holodomor was conceived and executed on the orders fo  Josef Stalin. Grain and other foodstuffs were requisitioned from Ukraine to such a degree that the local populations was left with nothing to eat.

This was done to break the Ukrainian people’s opposition to forced collectivization of agriculture and its national resistance to Soviet rule. In 2006, the Holodomor has been recognized by the independent Ukraine and several other countries – including Canada – as a genocide of the Ukrainian people.

On September 21, 2014, the Ukrainian Canadian Congress – Manitoba Provincial Council sponsored the Official Unveiling of the Holodomor Statue: “Bitter Memories of Childhood” on the grounds of the Manitoba Legislative Building. The statue is located near the monument to Taras Shevchenko. Dignitaries in attendance included the Lt. Gov. of Manitoba, Hon. Philip Lee, and the Premier Hon. Greg Selinger, Metropolitan Lawrence Huculak, UCC National President Paul Grod and the President of the Ukrainian World Congress Eugene Czolij.
The monument is an exact copy of the statue which is located at the entrance to the Holodomor Memorial Museum in Kyiv, Ukraine.
UCC-MPC wishes to express its gratitude to the its Holodomor Awareness and Education Committee co-chaired by Irka Balan and Valia Noseworthy. In addition, it thanks Vasyl Balan for his invaluable assistance.
Thanks goes to the  Province of Manitoba for agreeing to have the monument placed on the territory of the Legislative Building, as well as providing technical assistance and arranging for the post-opening reception.

In June of 2013, UCC-MPC President Oksana Bondarchuk wrote to Parks Canada expressing concern that the sign post at the Variety Heritage Adventure Park on the grounds of the Forks in Winnipeg contained inaccurate language that was offensive to many in our community.The sign post, which has different signs pointing to countries from which immigrants to Canada had originated had two signs reading “Galicia (Kiev)” and “Russian Ukraine”.

After several phone call, letters, and meetings, UCC-MPC is pleased to report that this spring Parks Canada agreed to update the signs to read Zaporizhia, Ukraine and Lviv, Ukraine which represent the two major cities in the regions of Ukraine from which large numbers of Ukrainian settlers came to Canada.UCC-MPC is happy that through its efforts and the efforts of community members, public signage at one of Winnipeg’s most popular destinations for tourists and residents alike more accurately reflects our Ukrainian Canadian history.

If you notice other examples of inaccuracies or mistakes about the Ukrainian Canadian community in public places, in the media, etc, please let us know and UCC-MPC will do what it can to rectify this situation.Before and after pictures of the sign post at Variety Heritage Adventure Park are below.

In the Summer of 2013, UCC-MPC noticed that the Monument to the Holodomor, which is in front of Winnipeg’s City Hall on Main Street, was totally obscured by plant growth. Not only could passersby not see the Monument, but this landscaping mistake by the City was disrespectful to the memory of the 7 million Ukrainians killed by the Soviet regime during the artificial Famine-Genocide of 1932-33, now commonly known as the Holodomor.

Over the course of the Winter, UCC-MPC President Oksana Bondarchuk brought these concerns to the attention of officials with the City of Winnipeg and received assurances that this situation would not be repeated. UCC-MPC is happy to report that indeed, in the Summer of 2014 the landscaping in front of the Monument now serves to enhance it, not obscure.

If you notice other examples of similar situations with our community monuments or inaccuracies and mistakes about the Ukrainian Canadian community in public places, in the media, etc, please let us know and UCC-MPC will do what it can to rectify this situation.