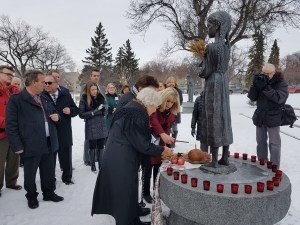 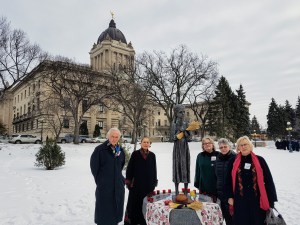 On November 23, 2017 at a ceremony at the Manitoba Provincial Legislature Building, Sport, Culture and Heritage Minister Hon. Cathy Cox  and Infrastructure Minister Hon. Ron Schuler, joined with community members and Members of the Legislative Assembly, to commemorate the victims of the Holodomor Famine Genocide in Ukraine, 1932-33.

Mrs Sonia Kushliak of Winnipeg represented the survivors of the Holodomor. Mrs. Kushliak spoke about the trauma that she and her family lived through during those horrible times.

There was a short ceremony which included a prayer led by Fr. Monsignor Michael Buychok of Sts Vladimir and Olga Cathedral in front of the  ‘Bitter Memories of Childhood’ monument on the Legislative Building Grounds. Later during Question Period, the Minister introduced a moment of silence. Stalks of wheat, tied with a black ribbon, were placed on the desk of every member of the Legislative Assembly.

The text of Minister Cox’s press release on the occasion can be read here: MANITOBA COMMEMORATES HOLODOMOR WITH UKRAINIAN COMMUNITY. Ukrainian Famine and Genocide Memorial Day Is Nov. 25