REPORT ON RALLY TO SUPPORT UKRAINE 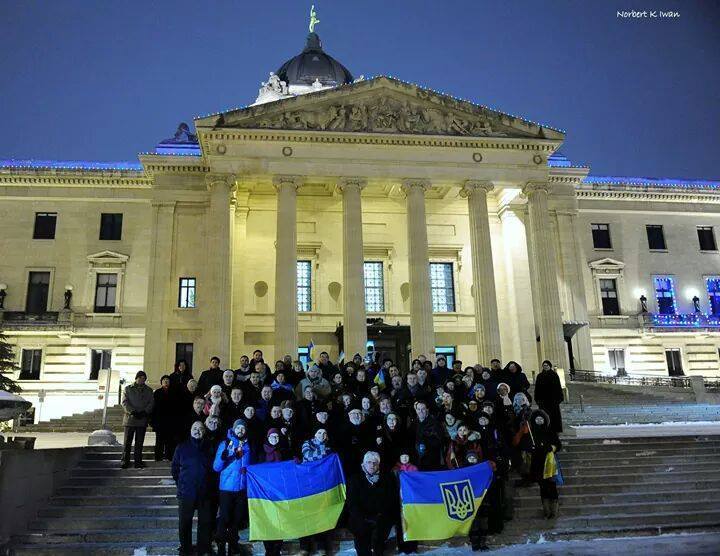 REPORT ON RALLY TO SUPPORT UKRAINE

The Rally to mark the 1st anniversary of the Euromaidan events and to show solidarity with Ukraine that was held at the Manitoba Legislative Building on December 7, 2014 went over very well. Some 150 people were in attendance. The event was well covered by 4 television stations in Winnipeg as well as in the Winnipeg Free Press. Greetings were brought on behalf of the Federal Government by Lawrence Toet, MP for Transcona. Greetings from the  Province was made by Hon. Ron Kostyshyn – Minister of Agriculture and MLA for Swan River, the Provincial Progressive Conservatives by Ron Schuler, MLA for St. Paul, while the Provincial Liberal Party was represented by it leader Rana Bokhari and Dr. Jon Gerrard, MLA for River Heights. Joyce Bateman, MP for Winnipeg South Centre was also present to demonstrate solidarity. All the speakers articulately expressed the need to support Ukraine and the commitment of all levels of government and political parties to this.

Our Metropolitans, His Eminence Archbishop Yurij, and His Grace Archbishop Lawrence, opened and closed, respectively, the Rally with highly spiritual and uplifting invocations.UCC MPC President Oksana Bondarchuk spoke on the importance of Maidan and the community response to the events of the past year in the humanitarian sphere. Prof. Myroslav Shkandrij eloquently outline the significance of the the Revolution of Dignity and the Russian intervention for Ukraine. Nick Krawetz alerted the community to the urgent needs of people displaced because of the war in Eastern Ukraine, while Myroslava Pidhirna recited a moving poem inspired by events on the Maidan in Kyiv.

Thanks to Mr. Norbert Iwan for photographing the Rally. His photographs can been seen here.