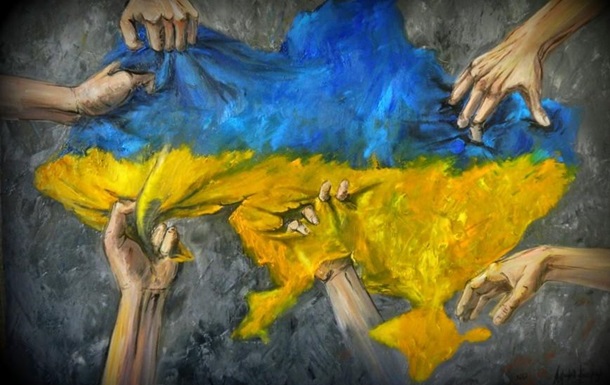 Let us consider the dismemberment, the cutting into pieces, or, better put, the mutilation of a country.

Yelping that Crimea’s Russian majority was under threat from gangs of rampaging “neo-Nazis, nationalists, and anti-Semites,” spewing out of Kyiv’s Euromaidan and headed south, Vladimir Putin, the Russian Federation’s president-in-perpetuity, dispatched troops to the ‘rescue,’ so rendering a European state.

To date the ‘fascists’ menacing Russia’s colonists in Crimea have proven phantasmagorical. Indeed the only folks (volks?) found giving the Nazi salute there, while warming their backsides with burnt offerings of Ukrainian and Jewish books, were the lumpenproletariat skinheads of the “Russian unity” movement. Their peculiar choice of evening entertainment hasn’t been seen in Europe since April 6, 1933, when Hitler’s Brownshirts ‘cleansed’ the Third Reich of ‘decadent’ literature. Mr. Putin keeps curious company.

But a question remains: Assuming they even existed, where did Putin’s nightmare Nazis disappear to? Did they find some other land to bogey? Perhaps they went north to Estonia, where one-quarter of the population are Russians, or into Latvia, where almost 25 per cent constitute the demographic leavings of Soviet imperialism. For Moscow’s men these minority exclaves must appear much more vulnerable than their counterparts in Crimea. Will Russian troops next invade the Baltic states? Probably not, most respond, as they are in NATO, their political independence, territorial integrity, and sovereignty guaranteed by the Alliance. Really? Ask Ukrainians today what their treaties with NATO proved to be worth. My guess is people in Tallinn and Riga are having bad dreams right now, not alarmed by fantasies featuring reanimated hordes of Hitlerites tramping their way, but instead having night sweats about the Russian bear coming out of hibernation.

The Kremlin’s carvers have set others on edge, too. Stranded in their only homeland, now occupied by racist Russians, Crimea’s Tatars are under real threat, particularly if, as seems likely, Ukrainians they have lived with in peace for decades are forced to decamp, retiring to regroup into whatever remains of Ukraine. To use politically correct Canadian terminology the Crimean Tatars are a “first nations” people. They have nowhere else to go. And they well remember the ruthless deportation of their nation at Stalin’s command, in May 1944, when some 200,000 men, women and children were exiled, and many murdered. Now they find themselves, yet again, in the Kremlin’s clutches. Stalin’s unfinished cultural genocide may see its final solution under Putin. Now there’s a legacy project.

Geopolitical schemes that segregate human beings into minorities versus majorities always unchain a certain species of genie, the kind of demon that insists states must be ethnically homogeneous, as close to ‘racially pure’ as possible. Political architects favouring such discriminatory ordering of human territory always come around to demanding that whoever “the other” may be in this or that country all of them should be excised — by enervation, expulsion, or worse. Putin’s delusional dream of reconstituting a ‘Great Russian’ imperium outside of Europe is built upon just such an atavistic spasm. Of course he still claims all he is doing is protecting innocents against ‘fascists.’ His biggest problem is he can’t find any, except for his own.

While we wait for Russian Ghostbusters to locate a non-Russian fascist, let’s apply Putin’s prescription for peace in our time to the Russian Federation, just for fun. Take these examples: Chechnya’s Muslim population is 95.3 per cent Chechen. And Tatarstan is 53.2 per cent Tatar. Please don’t forget Kalmykia, where 57.4 per cent of the native population are Buddhists. Shouldn’t these distinct nations (and there are many others inside the Russian Federation) have a democratic say over whether or not they want to remain in Russia? Or does Putin only believe in allowing referenda when the results are made certain by Russian bayonets and bullyboys? Since the Russian Federation is not indivisible — and if Ukraine must suffer amputation — why not “Mother Russia” too? Allow me to add: ‘ladies first.’

Crimea was, and is, a distinct society, and no Ukrainian I ever met there, or anywhere else, would say anything different. Crimea’s Tatars have already demonstrated they are patriots, championing Ukraine’s national unity in the face of a Russian military occupation. No staged referendum will ever change that. And while Ukraine remains in the throes of revolution, the vast majority of its citizenry — whether of Ukrainian, Russian, Jewish, Crimean Tatar or other origins — are united by a good dream. They hope to awaken in a Ukraine within Europe. Their only nightmare is that they will instead arise to find themselves abandoned by the West, left in limbo, in a satrapy enslaved within a resuscitated Russian empire. So expect Ukrainians to fight for their freedom. If Putin doesn’t wake up to that fact, and soon, his nightmares will have only just begun.

Lubomyr Luciuk is a professor of political geography at the Royal Military College of Canada.